There And Back Again

Taking cue from the phrase “When the going gets tough, the tough get going” I decided to escape my bourgeoisie-cubicled-office-going existence with a Diwali vacation. Off I flew to leave behind my stress and sorrows. After knocking off “Learn to Surf” from my bucket list last year, I booked a flight to Sri Lanka to strike through the second goal, “Travel to a beach town alone”.

Sri Lanka, because it comes cheap.  Alone, because I like to torture myself.

Colombo being the capital city, obviously put its best foot forward. It is well landscaped and exudes serenity. The infrastructure boasts what an Indian city could, would and should look like. Fresh air, smooth roads and clean streets. The vibe visibly rocks the Buddhist faith because even traffic jams are peaceful here! The locals seem extremely composed unlike those of Bombay that usually hyperventilate and frantically move from A place to B like headless chickens running after money. In stark contrast, Sinhalese folk have a gait that resembles floating on clouds. They are more than happy to make eye contact and flash a smile with a manner-full nod. Instantly I grew possessive of its humility and feared it being corrupted by the influence of foreign investment. I witnessed a lot of Japanese and Tata automobiles, with the Galle Sea Face promenade flanked by Asian, Indian and Hilton hotels. Yet, there lay an unusual un-ambitiousness in the air which was touching and refreshing. Aside from this quality though, Colombo resembles posh pockets of Pune and Bombay.

The next day, an 8 hourish train journey from Elle to Kandy was delightful through those chill, green hills and forests. The scenery wasn’t as much of a culture shock for me as it probably was for the whites hailing from concrete jungles of New York, Australia and France. I used only a fraction of the time taking pictures and the rest rethinking my holiday… Something has to be said about the inertia of motion and stillness during transit: The environment around us was moving every second, yet the seats in the train and the passengers on it remained put as a unit. This journey, I realized was proving metaphorical. I wanted to get away from the ennui of familiarity, but ultimately ended up in a land that despite its foreign boundary, looked and felt no different. That’s when it set in- that perhaps I should have traveled to a far more exotic, unique destination than just one south of the Indian border. (Doh!) But it was too late to change course so I quit making the long face and pretended to be in a tube train passing through Switzerland instead.

The rains ruined my plans to trek Adam’s Peak at Kandy so I ended up holed up at the motel using their rickety WiFi. Authentic Sri Lankan food I found was a dry, bland version of south Indian meals. Helpless, I stuck to English breakfasts and Shezwan Noodles. So far the trip wasn’t turning out great but I made an obediently conscious effort to resist sulking. It was perhaps the visit to Gangarama and Temple of Tooth and learning the story behind how Buddhism came to be that had tamed my otherwise short temper and easy-to-cause-scowl. I wish that some amount of trekking would have been plausible so that I could write a more Rocky-Balboa-type mountain climb story to the imaginary soundtrack of Flashdance. But it wasn’t meant to be.

Moving on to a much better segment in the running theme of “Great Expectations”, I visited the Pinnawala Elephant Orphanage. Elephants are my favorite animals and I have always been drawn to them strongly. I had read of mistreatment of the animals at the hands of mahoots but besides the chains restricting their movement, I only saw one other reason for worry. The older elephants looked too tired and depressed. Their eyes were drooped and downcast which hurt me. I made up for it to the extent I could by bathing and feeding 2 elephants. I generously and genuinely gave them my heart, mind and time and felt good at the end of it. These orphanages require money to afford food, water, milk, trainers, shelter maintenance and medication. So paying to watch them put up a show of sorts in cages doesn’t feel all that wrong. What sucks is that the second generation elephants were born in captivity at the orphanage which now serves as a zoo of sorts. They cannot be let out in the wild because of lurking poachers and ivory hunters but it is unfair that such majestic animals, that are literally on top of the food chain and pave the path for other wildlife to follow, should be at the mercy of humans that caused their problems in the first place.

The south west coast of Sri Lanka is where the Tsunami hit 11 years ago and I made a visit to the only Tsunami memorial of the country, erected and run by one of the survivors- Kamina. Her house, now the museum, was right across the road from the beach and was desecrated when the first wave hit. Her first account story, while taking me through the pictures and archives of the events that followed, was chilling and heart breaking.  The idea of your whole life and record of memories being destroyed without warning and having to start from scratch, while the rest of the world carries on unaffected, reminded me of the current plight of refugees in the middle-east. 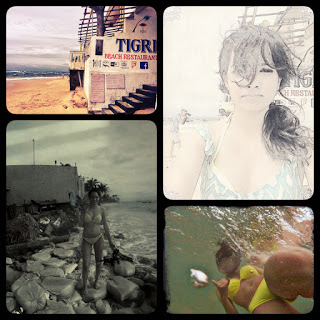 They are being displaced by a tsunami of terror and here I was among others, about to laze on a beachfront sipping on a coconut. The fragility and futility of life juxtaposed with humanity and perseverance is puzzling indeed and I appreciate and value it more now.

Going back to the basics is a frequency I tuned into as I swam deep into the very waters that wrecked havoc a decade ago. While snorkeling I came by pretty coral reefs and schools of fish. I was in search not only of sea turtles but also the truth to what my life should really be about? If I had to start over, which direction would I head in? I knew the answer even before I posed that question. You see, the real reason why I chose Sri Lanka is because I am too much of a square. Yes it was a quick and cheap holiday but, I actually hired a driver cum guide to show me around, pick and drop me off at all junctions from 5 star hotels, in an air conditioned car. Whatever surprise you had at the beginning about me winging a solo trip on a whim can kiss my Sri Lankan butler’s ass! I do things by the book and with strings firmly attached. I didn’t venture too far away from familiar territory, but hey, I still reached an epiphany. “Shake off all inhibitions and let your confidence sail you through the fear of failure. Otherwise you will not be able to swim past shallow waters.” This doesn’t mean I am planning an excursion to Bermuda, but I am defiantly re-arranging furniture in my house of priorities. I know where to aim. All I need to prepare for now, is a leap of faith!